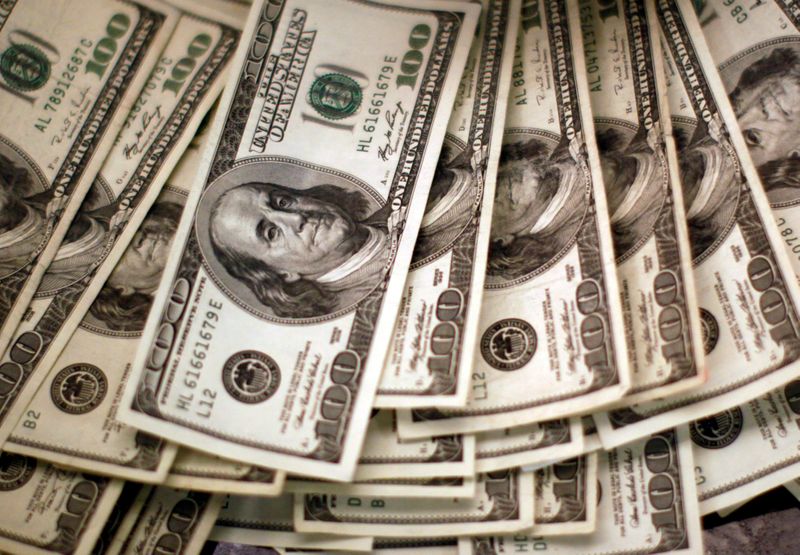 © Reuters. FILE PHOTO: U.S. dollars are counted out by a banker at a bank in Westminster

TOKYO (Reuters) – The dollar was steady against a basket of currencies on Tuesday as traders looked out to the first U.S. presidential debate and developments on the U.S. stimulus bill.

All eyes are on the first U.S. presidential election debate where Democrat Joe Biden and Republican Donald Trump will square off later in the day (Wednesday 0100 GMT).

"If the debate puts Trump on the back foot and Biden keeps his lead, I think it could lead people to let go of their dollars," said Daisuke Karakama, chief market economist at Mizuho Bank.

“The dollar market has been broadly bottoming out from low prices since mid-September. The question is what would be the trend in October,” Karakama said, adding that market participants are also keeping a close watch on any stimulus package plans.

House speaker Nancy Pelosi said on Monday the Democratic lawmakers were unveiling a new $2.2 trillion coronavirus relief bill, which was a compromise measure that reduces the costs of the economic aid.

Markets are also braced for a slew of data to gauge the health of the world's biggest economy ahead of the election, analysts say, including Tuesday's consumer confidence, a manufacturing survey and consumer data on Thursday as well as jobs report on Friday.

Sterling outperformed other currencies, extending overnight gains on optimism about a Brexit trade deal as the European Union and Britain kicked off a decisive week of talks.

Against the euro, sterling changed hands at 90.74 pence (EURGBP=D3).

While both the EU and Britain said a post-Brexit agreement was still some way off, European Commission chief Ursula von der Leyen said a deal was still possible.

Separately, Bank of England Deputy Governor Dave Ramsden said he thought the floor for the central bank's key interest rate was 0.1%, but the BoE was "duty-bound" to consider pushing the rates below zero.

The euro changed hands at $1.1678 (EUR=), with gains capped by European Central Bank President Christine Lagarde's remarks that the external value of the shared currency has an impact on inflation, and that policymakers will monitor currency movements.

As Europe grapples with a surge in new COVID-19 infections, traders will be looking out for euro zone consumer confidence and industrial sentiment data for September for signs of any impact on the region’s economic recovery.

Elsewhere, the dollar edged lower against the yen at 105.43 yen . Data on Tuesday showed Tokyo’s core consumer prices fell 0.2% in September, the latest evidence of the lingering impact of the coronavirus on business activity.

The Antipodean currencies gained moderately, with the Australian dollar last trading at $0.7093 while the kiwi sat at $0.6566.