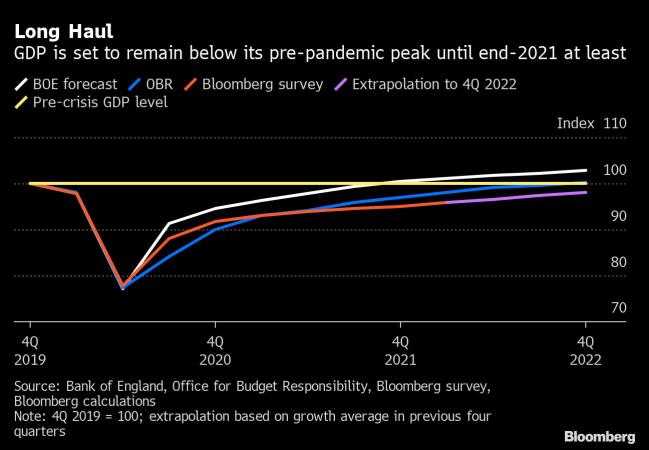 (Bloomberg) — The Bank of England will probably need to ease monetary policy further to help combat the economic impact of the coronavirus, according to central bank official Michael Saunders.

Saunders, who sits on the BOE’s rate-setting committee, said in a speech Friday that the risks to the central bank’s growth forecasts are to the downside, and the bank should “lean strongly” against such threats. The pound initially slipped and gilts pared losses as Saunders spoke.

“I consider it quite likely that additional monetary easing will be appropriate in order to achieve a sustained return of inflation to the 2% target,” Saunders said. “My hunch is that risks lie on the side of weaker growth and a longer period of excess supply than forecast.”

In response to questions after the speech, Saunders said there was “certainly” scope to expand the BOE’s bond-buying plan, and that officials were still reviewing whether taking interest rates below zero would be an effective form of stimulus.

The comments are the latest in a string of dovish comments from BOE officials as they look to convince the markets they have enough firepower to help address what could be a chaotic final end to 2020.

The government’s furlough plan is due to come to an end next month, despite think tanks warning that millions of workers will still be relying on wage support. That’s putting Chancellor of the Exchequer Rishi Sunak under pressure to extend aid to prevent a dramatic increase in unemployment.

Other European nations, including Germany, have already taken such a step, although Sunak has thus far ruled it out.

Testifying to lawmakers on Wednesday, Deputy Governor Dave Ramsden said the BOE has the capacity to increase the pace and size of its bond-buying program if needed, while Governor Andrew Bailey just last week said the central bank has plenty of room to add monetary stimulus, even including negative interest rates.

The BOE has already unleashed a raft of stimulus measures in the wake of the pandemic, including slashing the benchmark interest rate to a record-low 0.1% and raising its asset-purchase target by 300 billion pounds ($400 billion) to 745 billion pounds.

Economists and investors expect the bank to expand its bond-buying plan later this year amid concerns over a spike in unemployment. The U.K. saw the biggest contraction among developed nations in the second quarter, and any economic recovery could also be derailed by a resurgence in the coronavirus and a messy Brexit at the end of this year.

Around half of firms expect that the U.K. will have no trading deal in place when the current post-Brexit transition period ends on Dec. 31, Saunders said.

Unemployment is set to rise markedly as the government wage-support program ends and demand remains weak, Saunders said. The BOE forecast the jobless rate would almost double to 7.5% by the end of the year in the sharpest jump in at least 50 years, something he said remains “highly plausible.”

Saunders’s views has often proved a bellweather for the committee as a whole. He was among the first to vote for a tightening of policy before hikes in 2017 and 2018, and called for additional easing in May before a move in June.