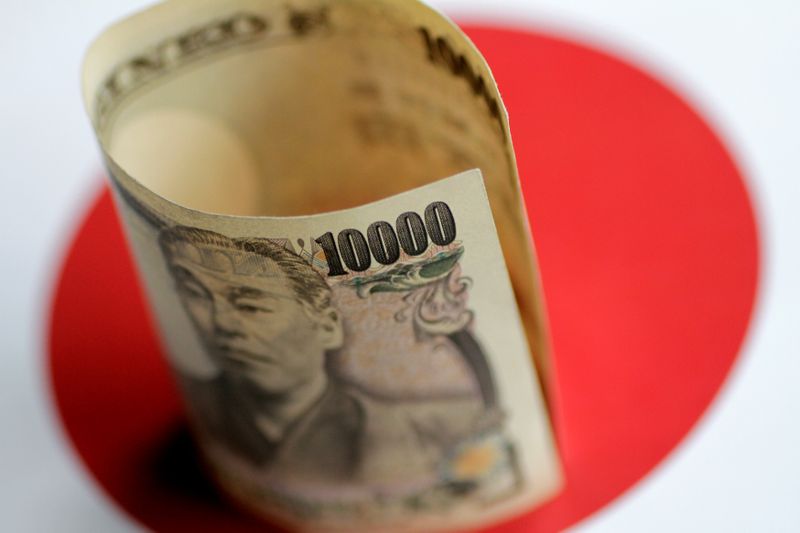 LONDON/TOKYO (Reuters) – The coronavirus epidemic – and the collapse in global interest rates it has sparked – may have blown a hole in conventional market wisdom that Japan's yen strengthens during crises, triggering a warning bell for investors.

The yen has long been among the assets in greatest demand during disasters, when waves of overseas-held capital traditionally flee back to Japan, pushing the currency higher.

And for more than two decades, the trend has held.

In mid-March, when the pandemic shock was at its height, that didn't happen. U.S. equities tumbled 9% and 15% in successive weeks but the yen fell too. In subsequent selloffs, including this month's 4% (SPX) equity slump, the currency has barely budged.

"The correlation with stocks didn't hold during the corona crisis, which is a game changer as to how everyone looks at the yen," Andreas Steno Larsen, chief global FX strategist at Nordea Markets, said.

The inverse 90-day yen-S&P500 correlation has since weakened to near decade-lows, he noted.

Between Jan 20 and Sept 9, the yen firmed 2% against a basket of major currencies, State Street (NYSE:STT) calculates – a stark contrast with its 27% surge during the July-March 2008-9 crisis.

For Japan's export-reliant economy, having frequently contended with sudden yen spikes, it is a positive. Investors though, face a hunt for other safe havens, should the yen lose that status.

It's a source of unease for investors such as Aaron Hurd, senior currency portfolio manager at State Street Global Markets, who uses the yen as a counterweight to risky assets in some investment models.

While Hurd doesn't believe the yen has shed its safe-haven role, he said its gains during recent risk-off episodes had been "a bit disappointing" and needed monitoring.

The yen's reputation stems from Japan's stash of foreign assets, at $3.5 trillion the world's largest international investment position. But it is also linked to a well established market trend – the carry trade, where low-yield currencies are borrowed and then sold for higher-yield assets overseas.

That makes the yen prone to periodic spikes; when world markets go into reverse, so do carry trades, fuelling a mass rush back into the funding currency to limit losses.

But yen-funded carry trades declined to around 8 trillion yen ($75.5 billion) in July, estimates Tohru Sasaki, JPMorgan (NYSE:JPM)'s head of Japan market research, down from a steady 10 trillion yen or so in recent years and a 2007 peak around 23 trillion yen.

What's changed is that this year's worldwide collapse in short-term rates has eliminated the yield discount the yen has held since 1995, when Japanese benchmark rates fell to 0.5%.

Oliver Brennan, macro strategist at TS Lombard, noted Swiss and euro zone interest rates were below Japan's, so "if yen shorts from carry trades are going to be much smaller …then the yen would no longer act as a risk-off currency."

It's still early days; after all, acute dollar shortages in March saw all other currencies being brushed aside. But guessing the identity of the next haven currency is already "the hottest topic in FX markets", says Nordea's Steno Larsen.

The shifting FX dynamics may test the European Central Bank.

With -0.5% interest rates, a balance of payments surplus, large capital markets and recent improvements in European cohesion, the euro might well be a candidate to replace the yen.

One central bank official recalled the euro's sudden spike to 14-month highs in March, driven possibly by carry traders who had used it for funding before turmoil erupted.

"It may be due to the fact that running up to the COVID-19 stress there had been some shifts in the preferred funding currency for carry trades and the euro emerged as the currency you want to be short," he said.